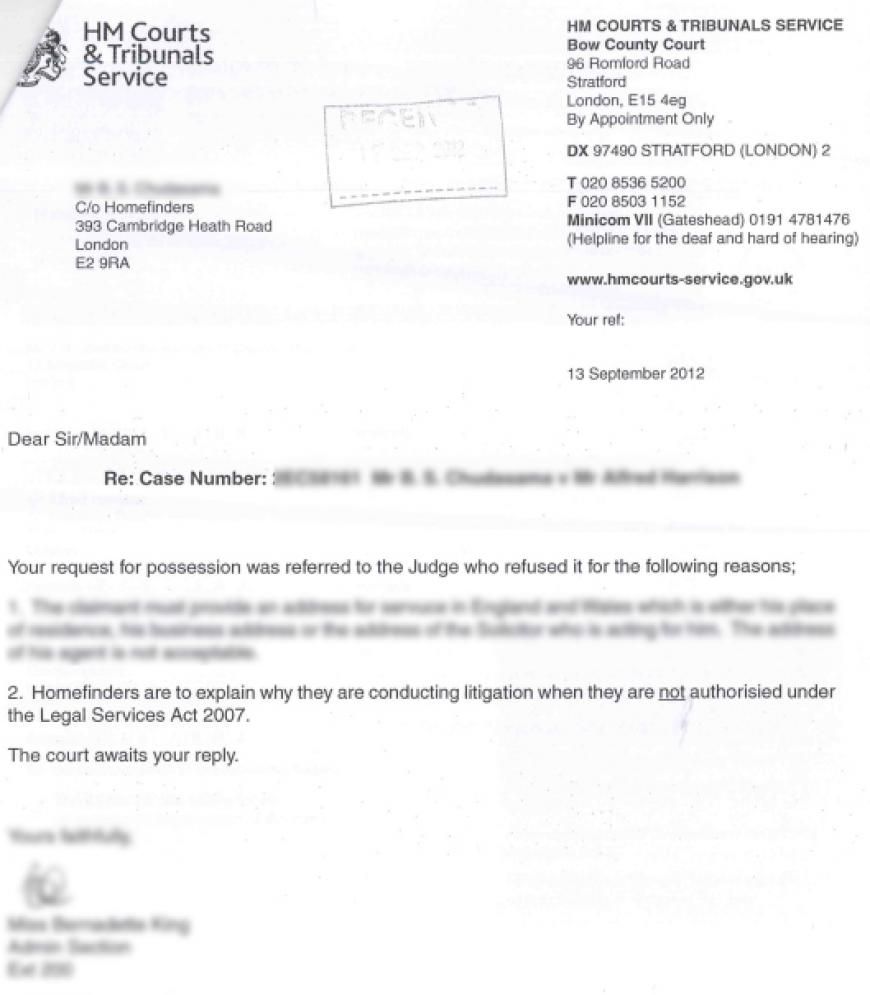 After one of our tenants refused to vacate upon expiry of two months’ notice (Section 21), their landlord decided to apply for a possession order. We drafted papers on behalf of the client, they checked them, signed them, and we forward them to the court along with a cheque to assign the expense against the client’s property. It’s a fairly straight forward process and, after a few months of forms pinging back and forth from the client and the court, results in a possession order. Or at least it always used to be.

We received a letter from Bow County Court asking us why we were conducting litigation? Initially I misread it and was in the middle of celebrating my successful (and inadvertent) completion of a law conversion, when the possible implications of the letter sank in.

For those of you who’ve tried to seek clarification from the courts on documentation that they’ve sent, you’ll already know how pointless it can be, feel free to skip the next paragraph.

I rang the court to find out exactly why they thought we were conducting litigation.

“The judge has asked you to explain that”. I agreed that the judge was correct in stating we weren’t the claimant or the solicitor, so if they could provide a little more clarification as to why they thought we’d instigated litigation, I would be able to answer their query. “I can’t interpret the letter further”. I already knew the answer but thought I’d ask anyway… “well of course the judge can tell you more…no, of course you can’t speak to them”. I called a property law specialist that we use and asked him.

Having listened to my query, and after a little more chuckling than I expect from someone who’s doubtlessly about to charge me £100 for answering the phone, he cut to the chase “Who paid the cheque?”. It turns out that making a payment on your client’s behalf can be construed by the court as “conducting litigation”. I pointed out that we’ve been forwarding claim forms for Section 21 possessions for years, the claimant signed the claim forms, and the very same court sent us two other possession orders that week. “It’s basically balderdash” (I’m convinced my solicitor spends most of his fee on antique words) it’s left to a judge’s discretion if they want to query why payment came from a source other than the claimant.

It seems a bit hit and miss at the moment and, so far Bow is only one of two courts we use who seem to have had an issue with it. However it’s likely to become the norm as the courts try and quash the amount of firms our solicitor considers to be “idiotic, clueless, online possession specialists” (I would like to try and describe how much disdain our solicitor used in the enunciation of ‘specialists’ but I don’t have his budget to spend on big words). The penalties for ignoring this change are fairly severe, the court reserves the right to fine anyone they feel has broken the act that covers this situation (Legal Services Act 2007).

A lot of agents will have a clause in their terms and conditions stating that (and I’m paraphrasing) legal action is the landlord’s problem. That’s not the kind of service we’ve ever wanted to offer but we’re being pushed there, and the act is going to reduce the amount of cheap possession only services, meaning landlord’s are faced with increasing expenses if using solicitors, as well as the following problems:

If you’ve got any queries we can possibly help with, get in touch.